Kiyome, better known as Abe no Seimei, is a Makai Priestess who serves as Raikou's handler in GARO: The Crimson Moon. The character is based on the real-life onmyōji Abe no Seimei.

Seimei normally has a playful and easygoing personality, having an affinity for sweets. But she can get serious when challenged. She believes beauty is important, and will often remark upon it when she sees it. She often poses as a courtesan to lure men in for her own interests. She also has an unexplained hatred for butterflies and is noted to be a frequent liar.

Aside from her ability to control the seal on the Garo armor, Seimei also displays the ability to create a spiritual barrier to prevent Horrors from escaping battles with Garo. The barrier, however, has another more important task; it stops the flow of time inside the barrier, therefore letting Makai Knights use their armors as long as they want without any drawbacks.

She can also use other Alchemy abilities such as generating and manipulating a wave of Sakura Tree Petals to attack enemies. Upon contact, enemies would be engulfed in blue flames. Seimei also used a teleportation ability, which activated the moment she was touched, leaving her to appear behind the police captain with a sheet of paper where she once stood.

By opening a glyph on her hand and aiming, she can summon vines from below her feet to chase after and bind others. Her sleeves can stretch and harden to become sharp swords. She can also summon and fire a set of light projectiles.

Born as Kiyome, she is the highly revered Abe clan which made a living as Onmyōji. But Kiyome later assumed the name of Seimei when she became a Makai Priestess, her history putting her in conflict with the nobility and other onmyōji of Heian-kyō. Kiyome later discovered Raikou while he is trapped in his Garo armor's Lost Soul Beast form, freeing Raikou while putting a seal on Zaruba to keep the Makai Knight from summoning his armor without her consent. 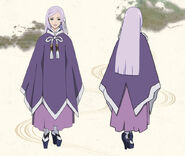 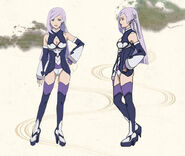 Retrieved from "https://garo.fandom.com/wiki/Abe_no_Seimei?oldid=15969"
Community content is available under CC-BY-SA unless otherwise noted.