Aguri Kusugami (楠神 哀空吏, Kusugami Aguri) is a Makai Knight that wields the Makai Armor Gai; his title is Gai the Sky Bow Knight. He is one of the protagonists featured in The One Who Shines in the Darkness (First season of Ryūga-verse series and Season 3 of overall Garo series) and Fang of God.

Aguri comes from the famous Kusugami Clan, a well-known bloodline of Makai Archers. Although trained as a knight, he's an intellectual and prefers to resolve matters with his mind over brute force; he regards other knights in a less respectful manner as he presumes they're unable to grasp the depths of his intellectual intentions.

Aguri Kusugami is the latest in his line to inherit the title of Gai the Sky Bow Knight, who secretly worries that he cannot live up to his family's prestige. His family is known for skills in archery and as noted by Ryūga, being able to shoot arrows rapidly is one of the basics of the Kusugami Style Archery Techniques. Although his combat skills lie predominantly in archery, like any other Knights, he is capable of fighting in close quarters. As such, he wields a large bladed bow which also serves as a close quarter weapon. He does not see much in Ryūga and initially adopts a rather antagonistic attitude towards the newcomer. Cool-headed and standoffish, Aguri favors careful and meticulous planning over rushing into battles like the knights are usually known for, and he does not mind using unwilling people as bait if it means getting the job done. As such, despite being the brains of the group, he does not mingle well with the other two knights and often comes into clashes with them. After Takeru mellows down due to affection for Rui and Ryūga showing kindness over time, he gradually warms up to both of them. Despite seemingly stoic-looking, he is not devoid of compassion, shown during a mission in the Kaneshiro Foods Factory (which has a plant for packaging human souls into capsules) where he opts to trigger the emergency alarm to have the human staff evacuated, despite the possibility of jeopardizing the mission due to SG1 arriving in minutes, after being shown the lives devastated in the harvesting of human souls. While he is shown earlier to be unable to shoot arrows capable of piercing through Madō Horrors, he eventually becomes skilled enough through rigorous training to be able to accomplish the feat.

After the disastrous mission and hearing of Ryūga's prison break, he correctly predicts that Ryūga would head straight for the Garoken despite unfavorable odds. He promptly sets out to Ryūga's aid despite the group being in no shape to fight after their last ordeal. His bow is broken by Sonshi in the fight to help Ryūga get his sword back. The bow is repaired soon after but is now capable of being separated in the middle and used as a nunchaku as well as a pair of swords. Aguri also receives a special arrowhead from Burai that enables him to further weaken Zedom during the final battle. Once Vol City is saved, Aguri parts ways with his friends to join the Senate. However, wanting to hone his skills further before going, Aguri takes over Rian's duty as Vol City's protector so she can travel with Ryūga. 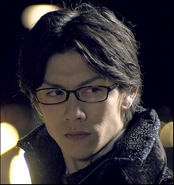 Aguri during The One Who Shines in the Darkness

Aguri (as Gai) poised to strike

Aguri in Fang of God