He makes a special return as the title character of the KIBA: Dark Knight Side Story to give his origin story.

Born into a makai family, Barago's father was a title-less knight and his mother a priestess. For a brief time, they were a happy family until Horrors took everything away from him. His mother eventually fell ill and was later taken by a Horror. Barago's father had to slay his own wife in front of him. His greatest emotional attachment was to his mother and it was his mother that inspired him to desire strength and power to overcome challenges in life. However, it became a life obsession as he matured. Because of his father's cold personality, he didn't have a sad reaction after learning his father was killed by a Horror. Instead, he felt his father died because he was too weak. By the time he became an apprentice to Taiga Saejima, he had hoped to become the strongest by training under the strongest knight, Garo. Unfortunately, Barago would never become the strongest with Taiga's son poised to succeed as the next Garo. The Mother of Horrors, Messiah, sensed Barago's desperation and offered him the dark armor, Kiba, as a means of gaining ultimate power. Willing to bargain his soul away, Barago made the contract with Messiah and he became the Dark Knight. In his quest for ultimate power and attain Messiah, he turned his back on Taiga and fought him. While in mortal combat, Taiga managed to slash an X-shaped scar on Barago's face with Garo's forearm blade. Barago managed to survive but was horribly disfigured. He later turned Kaoru into a dark gateway to help unleash Messiah until the mortal realm. To keep tabs on his investment, he uses a special shape-shifting potion to give himself a handsome face and act as Kaoru's therapist, Dr. Ryuzaki. During his time, the Makai Order sent Storm Knight Bado against him. In Bado's final attempt to redeem Barago, Bado gave him a ray of hope in the forms of Garo and his mother within his heart. However, with the intervention of Messiah, Barago cut away all his remaining goodness. Driven by grand ambition, Barago forsaken all that he loved for power.

Barago was the son of an untitled Makai Knight and a Makai Priestess and had a happy childhood. When his mother fell ill, Barago intended to protect his mother and thus decided to become a Makai Knight himself through harsh training. However, forced to watch his mother turn into a Horror before him, Barago's father kills her. Desiring to be strong, Barago left home to find himself another teacher, as he was unsure if his training with his father was of any use. News of his father's death came to him soon after he left home, but he felt no sadness as he thinks that his father died because he was weak. To that end, he became a talented Makai disciple of Taiga Saejima, hoping to become the next Garo.

Unfortunately, Barago wouldn't become Taiga's successor and in desperation for more power, Messiah heard his need. In Barago's search for power, he sensed Messiah's voice and appeared before him when he entered a forgotten lair, filled with forbidden techniques. Messiah proceeded to offer Barago her power in return for enacting the legend of Kiba, giving him both the name and armor of Kiba. Messiah taught Barago various skills, including how to endure his Soul armor's time limit and will himself out of his Lost Soul Beast Kiba (心滅獣身呀, Shinmetsu Jūshin Kiba) form by absorbing a Horror. She sends him out with the goal to absorb a total of a thousand Horrors to achieve immortality.

Barago proceeded to assimilate the attributes of Horrors he defeats through absorption; however, this came at the cost of his own humanity. Subsequent usage of the forbidden magic tainted the Soul Armor and reconfigured its form with more Horror-like features and further twisted Barago's soul. He would also battle the Bado the Storm Knight, a Makai Knight of the Eastern District in many duels with the goal of stopping the Dark Knight. It was then that Taiga was forced to take action against Barago, pursuing his corrupt disciple and engaged him in combat. Though he fatally wounded his former mentor, Barago was scarred with the "Mark of Death" as Taiga's final move in hope that the scar's effect would kill him in a few days. But the Horrors dwelling inside Barago's body enabled him to elude death, though his face became horribly deformed. It was by that time that Barago came to the realization that he despised Makai Knights more than Horrors as he devoured them as well. From there, Barago proceeded to hunt Horrors in order to absorb the needed quota of 1000 to bring Messiah into the world and become her immortal vessel. However, the absorption of Horrors and subsequent usage of the Madou's forbidden magics turns Barago into a monster who also eats Makai Knights. During the final confrontation against Storm Knight Bado, Barago was struck by his lightning attack and was implanted with thoughts of light and hope, which would cling on to his soul for the next couple of decades.

Halfway in reaching his goal, Barago proceeds to find an ideal human to serve as a living gateway for Messiah to possess: a girl of age six born on the sixth day of the sixth month. He found Kaoru soon after and marks her to become his gateway.

Murdering the previous Silver Fang Knight, Barago used a potion he stole from Rei's foster father to change his face into a youthful appearance, creating the identity of Ryuzaki to oversee Kaoru's well being as her personal psychiatrist and counselor. In order to ensure that she would be willing to continue being his patient, he would pay her money to give him updates on her life and if she had any problems. The aforementioned murder was also done in a bid to manipulate the new Silver Knight to do his and Gulm's dirty work and frame the Golden Knight for the deed so as to keep him distracted.

After over two decades of absorbing Horrors, Barago decided to quicken his goal of a thousand consumed Horrors by creating yin gates all over the city to create horrors. These gates started to take effect during the autumn and winter (during the start of the first season).

With his new face, Barago sought the legendary Horror Gyanon, only for Sigma Fudō to have stolen his quarry before he arrived. However, Barago gained a follower in Elda whom he revived as a Horror-like being.

In a dramatic grand display of power, Kiba appeared before Garo and Zero when the two are overpowered by a giant Horror created from the sealed Horror blades. Given the Ankokuzan halberd by the Eastern Watchdogs, Kiba single-handedly absorbed the giant Horror. When Barago's arrangements are nearly complete, he saw no more need to conceal his identity as Ryuzaki and kidnaps Kaoru to begin the summoning ritual to call forth Messiah.

He proceeded to reveal his life story to Kaoru before Messiah takes her over and has Barago severe his ties with his mother in order to destroy the very last trace of light. However, now beyond redemption, Barago learned too late that he was just being used by the Horror as Messiah "ate" Barago with little resistance. But his body returned to the living world after Messiah was defeated by Kouga, fully possessed by the armor of Kiba. Now nothing more than a Horror, Kiba battles Garo and Zero one final time, only to be destroyed by the former in a one-on-one swordfight.

Continuing from GARO, events in the novel revealed that after being killed by Messiah, the broken Barago is reunited with Taiga & Amon in the afterlife and desires to repent for his many sins. To atone, he helped summon the Garo armor during Kouga's final battle with Kiba in 2006. Later, he achieved his atonement and was reborn at some point prior to 2006 as the son of a Makai Knight's, who ran into Kaoru during her time in Italy. Additionally, it is revealed that the name “Barago” means “hope” in the old Makai language ironically as with Garo.

Although his soul had found a salvation and therefore reincarnated as a better person, Barago's dark legacy as Kiba still haunts the bloodline of very Makai Knight he despised. His surviving evil qi, which accumulated through absorbing Horrors during the man's dark days within Kiba combined with his Inga, coalesced into a spiritual Horror-like entity and restored the corrupted Makai Armor. Assuming his original self's identity, he travelled through corpses of fallen Knights before merging with the latest one, a man named Shiroku who became both his vessel and alter-ego until his full resurrection.

As Shiroku, Kiba/Barago seeks to claim Ouga armor to take his revenge on the Saejima family. In the end however, he was defeated through combined efforts of Taiga, Kouga, and Raiga. 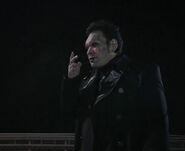 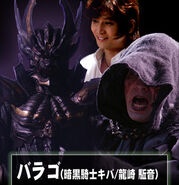