Baron is an azure Makai Armor that specializes in scimitar combat. Whoever wields the armor shall take the title of Baron the Thunder Knight (雷鳴騎士・破狼（バロン）Raimei Kishi Baron, lit. "Breaking Wolf"). The armor is currently wielded by Wataru Shijima.

The Baron armor has a strong resemblance to the Bado armor, only minor differences in its blades, color scheme, and design. Like most armors, its belt contains a symbol at the solar plexus to remove the armor from its user (if hit hard enough in emergency cases like Lost Soul Beast Transformation).

For combat, the knight is armed with a makai sword called Raimeiken (雷鳴剣, Thunder Sword), which dormant form that takes the appearance of a Jian with a blue handle and crossguard. In its transformed state, the sword becomes a scimitar with blades on the pommel and crossguard, which allows Baron to cut and slash through a target at any end of its weapon. Although titled as Thunder Knight, Baron has never shown any elemental qualities to its armor. As the armor also armed with blades on its upper body, the user can also use them against their foes as well depend on his combat style.

Like all makai armors, Baron is capable of using the Blazing Armament to enhance its combat strength with blue Madō Flames.

Baron's combat style reflects upon its user, Wataru, in charged strikes. When armored, Wataru tends to charge and twirl through targets like a massive wind blade to cut down a mass of targets. He primarily relies on charged strikes to quickly end the battle, but this method of combat is also physically demanding, quick to drain the user's strength. However, this combat style has suited Wataru well.

When horseback combat is needed, he can summon Shingetsu. However, it was never seen in action other than its promo pictures. As such, it's unknown whether it has any special gimmicks aside from generic powers and abilities of Madōba's like it.

Baron armor has been in possession of Wataru Shijima for quite some time. When encountering the Red Masked Man, the armor, along with its user, was corrupted by the mysterious enemy's Mark of Death. The armor eventually purified with combined forces of Tsubasa and Kouga, restoring it. 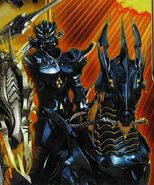 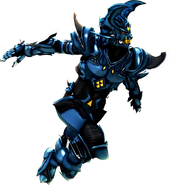 Retrieved from "https://garo.fandom.com/wiki/Baron?oldid=17710"
Community content is available under CC-BY-SA unless otherwise noted.