Kunihiro Kawashima
Boel is an Ogre-like Horror that acts as Rinza's subordinate in the events of Fang of God.

Boel is a creature of all brawns and limited brains. Resembling the character Gluttony from Fullmetal Alchemist, Boel displays a child-like mentality that loves to eat and follow his instincts. Paradoxically, he possesses a borderline-idealistic desire to become more powerful yet lacks much in the way of combat training outside of his Horror Form. In his humanoid form, Boel is very slow and not very maneuverable. He relies on his brawns and unique physiology to survive hand-to-hand combat. When struck with a makai blade, he actually emits pockets of hot pressurized gas from his body. It also acts as some sort of protection against sustaining critical damage. His most dangerous feat is when he takes on his demon beast form.

In his demonic beast form, Boel takes the form of a monster that's a cross between a tiger and dinosaur with shoulder cannons. He's physically stronger, has armored skin dense enough to resist makai blades, a tail to whip his opponents, and two shoulder cannons that can shoot large circles of fire. However, his cannons are best used from long distance. When engaged in melee combat, the cannons are useless and he must use brute strength to over power his opponents. Overall, Boel is a powerful and dimwitted Horror.

Boel is first seen at the house of a Professor that thought he was warning one of his students about Horrors, Makai Knights and a super-structure called the Fang of God. He was actually talking to the Horror Rinza. With the information in hand, she allows Boel to dispatch and consume the Professor before the duo leaves with the map in tow.

The two later assisted Banbi in extracting the Garo, Zen and Gai Makai Armors from their wielders for the Priestess' resurrection ritual. Boel's dark signature is used to lead Ryūga Dōgai and Takeru Jazukure to an abandoned warehouse where he engages the two Knights in combat. Ryūga is eventually coaxed into summoning the Garo armor, which ends up seized by Banbi. Boel then flees the area alongside Rinza and her Horror army.

Later, Banbi proceeds with her ritual. Instead of resurrecting her lover for one night, however, Rinza's trickery brings Jinga from the Makai Realm to the mortal plane instead. Boel bears witness to Jinga regaining portions of his memory during his clash with Ryūme.

With their key figure in-tow, Boel and the others flee to the location of the Arc's intended creation; whereupon Rinza appeals to Jinga to activate the Fang of God and help her troupe of Horrors reach the moon. Amused, Jinga accepts. Boel is ushered by his new king into stepping closer, whereupon he is brutally killed and used as the sacrifice to begin the Fang of God's creation. The remains of Boel turned him into a skeletal throne for Jinga to command. 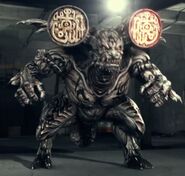