Knight was a fallen Makai Knight in Vanishing Line, and one of El Dorado's Three Swords (三剣, Sanken). He was once known as Christopher Harden, the Makai Knight with the title of the Bolg the Howling Knight.

Chris was formerly Bolg the Howling Knight and was regarded as the strongest amongst the Silver Knights before he became corrupted for power and became Knight of El Dorado. His wife was Makai Alchemist Adelaide Harden and his son is Luke. He originally had a good life, being a knight and having a family. He would train Luke as a knight to inherit his title, but he was also obsessed with becoming stronger. He values strength above all else, to the point that he claims that gaining strength and finding strong opponents to fight is his only reason for living. While training in forbidden techniques, he turned to the dark side and Chris viewed his family as a weakness and cut down Adelaide to free himself of his attachments. However, he left Luke alive, viewing him as weak. Now a servant of El Dorado, he returns to Luke's life as the Dark Knight, reigniting Luke's rage. While Luke is consumed with vengeance against Knight, Chris is only concerned about serving El Dorado and testing his might against Garo.

In the past, Chris was originally shown to be a strict, but a caring father to Luke. He also trained the young man to become a Makai Knight and eventually succeed him as the Strongest Silver Knight. However, he also sought to become stronger, originally seeing it as a means to truly become a protector. This thirst for power led him to eventually fall into darkness and become a Dark Knight.

By the present day, he is still shown to be corrupted by power, only seeing strength as the only real reason to live. He also indiscreet, unsociable, utterly ruthless, and enjoys battle above all else, and has also resented the idea of using strength to protect people. He despised the weak and ones who he sees "waste" their powers for others' sake, the latter because he believed them, particularly Makai Knights, not living up to their full potential.

While he taunts Sword and sees him wasting his potential as Garo, Chris also enjoys every single chance of fighting him. In spite of this, he knows when he must retreat when the odds have turned against him. Conversely, he despised the weak, believing that the weak should be destroyed. A testament of his ruthlessness is best displayed when he killed anyone he deems "in his way" regardless of who they are and massive collateral damage left behind from his first battle with Sword which killed dozens and injured many more in one single night. His obsession with strength has completely consumed him, motivating him to seek out worthy opponents to battle against and believing that the weak deserve to be wiped out.

When he was defeated by Sword, Chris revealed that he had found worth in his final duel against Garo in his last moments. 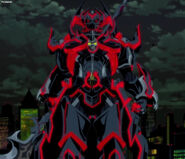