Daigo is a Makai Knight who is also in charge of training young Makai Knights-to-be and holds the title of a Guide (導師 Dōshi). He is a proud, stoic, cautious person who always properly weighs odds before doing something. Daigo holds the belief that Makai Knights should be more mindful and protective of their own lives and weapons, as their blades are tied to their lives, which are tied to the protection and salvation of innocent lives--a belief he teaches to all his students. His teaching methods are also fairly harsh and he will not hesitate to criticize and scold his students for minor mistakes, especially dropping or mishandling one's sword. Unlike many Makai Knights shown throughout the series who care little for their own social status, Daigo puts a lot of weight in seniority, rank, and authority, both his and that of others. He also tends to address people with their surnames instead of given names, an uncharacteristic trait within the Makai Order. As such, he refuses to "take orders" from his juniors unless absolutely necessary and demands respect and tact from those he deems lower than himself, only regarding someone if they address him with the proper decorum befitting his position. Ryuga, known for his recklessness and general disregard for authority, is a complete antithesis to Daigo. As such, Daigo is very disapproving of Ryuga's methods and way of life, while Ryuga finds his imposing presence irritating, thus resulting in their relationship being an uneasy one. Daigo also holds some distaste for Gald, as the boy's rude, informal, and disdainful attitude, especially towards Makai Knights, infuriates him. Despite his distaste for Gald, Daigo eventually develops a soft spot for Haruna, going as far as to keep an eye on her as a gym teacher at her school when she decides to temporarily enter normal life in GARO: Makai Tales.

Daigo first appeared to aid Ryūga Dōgai and Rian in defeating a mass breakout of Horrors in an old abandoned building. He was annoyed at first that another Makai Knight was in his territory and advised Ryuga to leave but learned that he was Garo. After enacting a plan to sink the building into the Makai Realm to remove it before it became a Gate, the three learn someone is trapped inside. Ryuga risked his life to rescue the homeless man and Rian tried to stop the spell, despite Daigo objecting to it. During his attempts to protect him, Ruyga recklessly tosses the Garoken out a window to kill one Horror. The homeless man and Ryuga become surrounded by Horrors on the roof, with Daigo arriving to save them and return Ryuga's sword. He dons his Giga armor and holds off the Horrors while the two jumped to safety. After finishing the Horrors and escaping the falling building, Daigo lectures Ryuga about throwing his life away so easily. Rian suspects that he is a Makai Instructor based on his mannerisms but he denies this. He then leaves after telling Ryuga that a Makai Knight's heart is their greatest weakness.

Daigo was on the hunt for a Horror and then learned it had gone to a high school that Haruna a former Makai Priestess was attending. He tried to enter the school, but the security guard stopped him and blocked his way in. He then decided to pose as a substitute PE teacher to locate the Horror and informed the young former priestess Haruna of his intent. After Haruna uncovers who the Horror is, Daigo transforms and quickly slays it, then leaves the school to continue his duties as a Makai Knight. 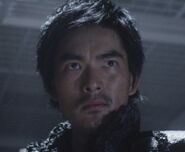 Retrieved from "https://garo.fandom.com/wiki/Daigo_Akizuki?oldid=17912"
Community content is available under CC-BY-SA unless otherwise noted.