Delitus was a giant Oni-faced Horror that took the form of a traditional Japanese straw-thatched house with his core assuming the form of a patriarch named Ichiro, while his Horror familiars assumed the form of his family.

Tricking people into entering their abode, Delitus and his familiars made their guests feel welcomed and joyful before tossing them into the empty communal pot at the center of the house to stew. From there, the house would vanish and reappear at another unlikely location. When Raiga arrived at the same time they were about to cook their latest victim, Ichiro attempted to convince the former that his methods were making people happy, but refusing to accept his logic, Raiga proceeds to defeat the former and his familiars. After being overwhelmed, Delitus assumes his true form with Raiga slaying the Horror with the help of Gōten. 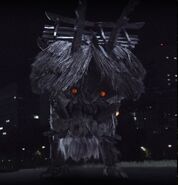