Born from the Previous Garo and an unseen and unnamed woman, Esmeralda was the younger sister of Anna Luís. When the Church began suspecting Makai Knights and Priests out of superstition of their non-Christian way of life, Esmeralda's father arranged for the newborn to taken by friend Rafael Banderas to be adopted into an aristocrat family for her protection. Raised without the knowledge of her bloodline, Esmeralda lived a life of privilege and safety and eventually married king Fernando Valiante. When Mendoza orchestrated an extermination of the Makai Knights and Priests under the guise of a witch hunt, Esmerelda bore witness to Anna's execution, unaware of their sisterly ties as she comforted her son when he was frightened at the time.

Seventeen years after Anna's death, Esmerelda gives Alphonso an item she had as long as she can remember, a cross pendant that she believed to be a protective charm. But what Esmerelda did not know was that the cross, revealed to be from her birth father, bore the Garo emblem. Mendoza recognized it and realized her son is a potential Makai Knight who could be a hindrance, arranging to take over of Valiante by poisoning the king and accusing Esmeralda of the deed so that her son, who he claimed was an illegitimate child born from an affair, would not ascend to the throne. Esmerelda is taken to the dungeon tower to wait for execution for treason, telling Alphonso to leave her and their home so he can find the Knight of Light and get strong to save their kingdom. While it was originally intended for Esmerelda to be executed for her alleged crimes, Mendoza was keeping her as a prisoner to use as a bargaining chip against Alfonso when he returned. But when she learns of Alphonso's return, Esmerelda takes her life so she could not be used against her son. 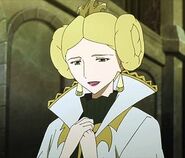 Add a photo to this gallery
Retrieved from "https://garo.fandom.com/wiki/Esmeralda_San_Valiante?oldid=20413"
Community content is available under CC-BY-SA unless otherwise noted.