Garo is the golden Makai Armor that specializes in longsword combat. Whoever wields the armor shall take the title of Garo the Golden Knight (黄金騎士・牙狼（ガロ） Ōgon Kishi Garo, lit. "Fanged Wolf"). In the series, Vanishing Line, the armor belongs to Sword.

By the era of Vanishing Line, the Garo Armor has been passed to Ragnvald bloodline with Wilhem Ragnvald aka Sword being its most recent bearer and the Makai Order has integrated modern technology into their world in order to better combat Horrors. Because of it, the Garo Armor now has a stronger focus on modern technology following the said change. The concept of Vanishing Line era Garo's design and equipment is partially inspired by Disney's TRON and Marvel's Ghost Rider. While basically still the same as its past incarnation, the armor now sports a bulkier and more futuristic look complete with circuits that glow with bright pink/purple accent upon charged with its bearer's ki (life energy). The original armor had secret retractable grappling hooks on the back of its armor; this version exposes it. Featured as two trailing tassels ending in sharp blades.

Following improvements of its arsenals, Garo's Madōba, Gōten, had been repurposed into the armor of the chassis for his Madō Motorcycle that is accessible whenever the armor is summoned. While Garo's Madō Ring, Zaruba, retains his role as Horror detector and advisor, he now has an additional role as the key to activate Garo's motorcycle. Once loaded into the bike, Zaruba has full control of the bike and acts as its pilot when Garo needs assistance. Because carrying Garoken would be noticeable by civilians, it's usually hidden inside a retractable compartment within the bike frame. When the Garoken is needed, Zaruba can position the bike within a distance to launch the sword to him. When summoning the armor, that power extends to the bike, giving Zaruba and the bike a golden armored form. With it, Zaruba can also engage in combat. However, Garo's capabilities and equipment would go through a major change after Zaruba's destruction.

Zaruba sacrificed himself by ramming the motorcycle into Knight to protect Sophie. The motorcycle was destroyed and half of Zaruba's head was gone. As the ring faded, Sword collected the remains of Zaruba's magic and punched it through the summoning halo of Garo, bonding the remains of its power into Garo, giving it an upgraded form. The remaining essence of Zaruba that had not bonded with the Garo Armor on the other hand, was later infused into Sword's reconstructed Madō Motorcycle by Makai Alchemists of Ferre Salé Dessimo, reviving the Madō ring as a much more powerful motorcycle who then in time saved both Sophie and Sword from swarms of Horrors at El Dorado.

By the era of Vanishing Line, Garo's Madō steed, Gōten, has been repurposed into combat chassis for Madō Motorcycle following the modernization of Makai Community by Makai Order. As combat chassis for Madō Motorcycles, its combat capabilities greatly enhanced in addition of retaining the old ones, including the ability to turn Garoken into a greatsword called Garo Zanbaken (牙狼斬馬剣 Garōzanbaken, Fanged-Wolf Horse-Slaying Sword). Golden Knight's Garo Zanbaken is also given revamped design, now possessing an ornate guard and jagged golden blade with at least five smaller curved blades on its point, increasing the stab damage. As shown in the final duel between Garo and Bolg, Garo Zanbaken now accessible without having to summon Gōten chassis over the bike first. 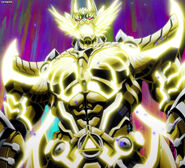 Retrieved from "https://garo.fandom.com/wiki/Garo_(Anime_Armor)/VL?oldid=18320"
Community content is available under CC-BY-SA unless otherwise noted.