Garo is a Makai Armor that specializes in longsword combat. Whoever wields the armor shall take the title of Garo the Golden Knight (黄金騎士・牙狼（ガロ） Ōgon Kishi Garo, lit. "Fanged Wolf"). In the Ryūga-verse, the armor never belonged to the Saejima Clan. A former Golden Knight sacrificed his life and the armor made it to Ryūga Dōgai as its most recent successor. This armor first appears in The One Who Shines in the Darkness.

The origins and history of this armor are different than the original. The armor is also composed of Soul Metal, but in this universe, the alloy originates from the body of Zedom. Because of that, the armor is susceptible to Zedom's influence. In the original universe, the golden shine of the armor is merely a decorative feature, but in this universe, the radiant shine actually emits an energy wave that has a negative effect upon Horrors. Another difference though is that the original armor was designed to convert people's feelings into energy, capable of temporarily transforming and increasing the power of Garo. However, the armor relies on Makai Priests and its knight to give it new powers and alternate forms.

Because this armor has magical powers tied to its golden shine, Horrors have trouble tolerating Garo's radiant energies. If used correctly, the user can channel the armor's latent powers to help defeat powerful enemies. However, should the energies be spent, the golden shine can be lost and the armor will physically transform into a blackened state, making it less effective against Horrors. To restore its full combat potential, the seedlings of Zedom can be converted into energy that can help replenish Garo's lost shine. However, it requires experienced priests to extract and re-energize the armor. The golden shine has been successfully restored by the efforts of Makai Priestess Hakana Dōgai. However, it would be its first and last time to do so as Zedom was defeated and his surviving body parts (which can reform him and enable him to be re-purposed as the source of Soul Metal) has been scattered to parts unknown. Until an alternative source of soul metal can be found, expending its golden energies again can no longer be restored.

For combat, the armor's radiant energies can weaken nearby Horrors like a powerful sunbeam towards a vampire. Much like its counterpart, Garo relies mainly on longsword and close-quarters combat to defeat its enemy. A difference though is the twin grappling hooks on Garo's back (featured in Flower of Makai) isn't present and the lack of Gōten, Garo's Madōba in the original universe. The Garo of this universe doesn't have one and relies on other means to defeat its target; this includes the inability to enhance his sword. However, it's unclear if it's time limit usage as never once the 99.9 seconds rule was applied and other armors are known to last beyond the presumed time limit they can utilize their armor. It was either a continuity error or Makai Armors don't have the same time limitations as knights within this universe.

Garo's Flight form is a permanent upgraded form with the help of Priestess Ryūme. While helping Ryūga Dōgai cleanse the armor of Jaki (dark energies), Ryūme magically altered and enhanced Garo. However, to what end is unclear as Garo never exhibited any special abilities after its new form. The only thing visibly different from the armor is an improved look and thicker armor. Its forearm blade is now gone, this prevents Garo from making slash attacks upon targets, but the forearm is thicker, with a reinforced end near the elbow, giving Garo harder physical back strikes and blocking. The overall new coverage makes Garo less susceptible to damage and fatigue for its user. No special gimmicks have been revealed yet.

Fallen Priestess Amily sent Ryūga into her Demon Mirror, where one is forced to face their own darkness. While inside, Ryūga's fears and darkness manifested itself into a large dark bestial form of the Garo Sword and attacked him. The greater his fear, the stronger the beast became. However, after realizing what the beast really meant and that his desire to protect the people that mattered to him, Ryūga made peace with his darkness, losing its golden shine once again, and discovered a new hidden power, Dark Garo.

Dark Garo is a temporary form that resembles the blackened armor color scheme of its Lost Shine form. Much about this form is unexplained, but the main difference now is that Garo can fly. In his darkness form, the armor can spring a bat-like cape, granting him temporary flight, but it's unclear if it did enhance its user's power. The dark armor is only temporary, long enough to allow Ryūga to slay a flying target for a few minutes before reverting back to it's ironic (non) Flight form. 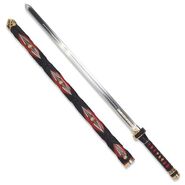 Ryūga, as Garo, shifting to his Dark Garo form 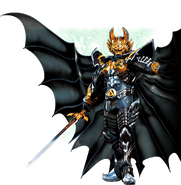 The Garo armor is typically passed on an inheritance from the previous generation, or master to disciple in the case of Ryūga after the bloodline of the previous bearer ended. The usual change in the armor after it has been passed is the eyes color.