The Giga Armor is an ornate, heavy plated, green and gold Makai Armor. True to its title, the Beast Form Knight or simply Beast Knight, the armor's design and aesthetics are somewhat themed after a beast resembling the cross between a wolf and an armored reptile, giving it its monstrous appearance.

While other knights employ the Blazing Armament technique in order to increase their combat potential, Giga rarely relies on such technique thanks to its above-average defensive and offensive capabilities. Though, like all makai armors, Giga is still capable of using the Blazing Armament to enhance its combat strength with blue Madō Flames.

Unlike other armors, Giga possesses considerable brute force and greater durability, even more so than Garo. In addition to easily overwhelming and defeating its enemies with sheer might alone, Giga can also endure greater magical and/or physical punishment than other armors thanks to its fortified armor platings, making bearers of this armor a staggering force like a tank. Unfortunately, its fortified armor platings also make Giga somewhat heavier, which often slows the wearer down. As such, Giga is more designed for close quarter combat (CQC) to compensate for its lack of speed; it takes advantage of its high defensive capabilities to draw in the enemy, where the knight can retaliate with great force. For that, Giga's Beast Ax possesses the unique ability to charge up energy and release it in an explosive tectonic shock-wave, powerful enough to instantly destroy weaker surrounding Horrors. However, this move takes a lot of energy for the user; it's used as a last resort to quickly end battles.

Like other armors in Ryūga-verse series, Giga is crafted from Zedom seed-based Soul Metal. 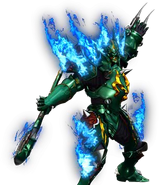 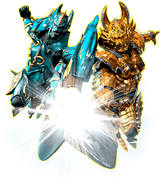