Ishutarb feeding method was to rip her preys to shreds with the chains from her mouth and ingest the pieces caught by her chains' links.

Ishutarb emerged from a chain that was converted into a Gate by Barago, and possessed the body of Azusa when she tripped on it. Using her host's scheme of taking advantage of money-minded people using an IT company as a front, Ishutarb lured her victims to meet with her during night time so she can devour them. Sensing Horror blood spilled on Kaoru, Ishutarb saw her as a potential meal, but she was thwarted by a combination of dumb luck and the appearance of Kouga Saejima. Ishutarb assumed her true form and fought Kouga in the parking lot, resulting in her death. 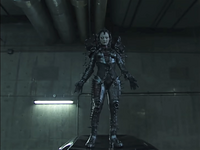 Full View of Ishutarb
Add a photo to this gallery

Retrieved from "https://garo.fandom.com/wiki/Ishutarb?oldid=20356"
Community content is available under CC-BY-SA unless otherwise noted.