Jabi (邪美, Jabi) is a Makai Priestess, disciple of Amon, and Kouga's childhood friend. She is featured in Chapter of the Black Wolf, Demon Beast of the Midnight Sun, Flash Knight, The Tougen Flute, and Makai Tales where she is one of the protagonists.

Jabi is a childhood friend of Kouga and a disciple to Amon. She and Kouga trained together but went their separate ways during their teenage years. Jabi is a sensually aggressive woman and wants to be a good woman rather than being a talented priestess. She and Kouga would cross paths again as adults, with Jabi framed for the murder of her mentor and stolen the purified Horror blades. Although Kouga believes she is not responsible for the murder, Jabi is unable to trust him because Amon's murderer is a Makai Knight. She is shown to have feelings for Kouga, yet knowing full well that she cannot have him as Kouga loves Kaoru. Jabi reveals the Eastern Watchdogs' true nature before agreeing to Kouga enter the Crimson Forest once they deal with the Horror Blades. When she and Kouga attempt to perform the Force Repatriation on their own, Kodama painfully banished her into Makai Tree and remains there until Kouga breaks her free with Rin's help. Jabi has since taken a liking to Rin and assists Rin in her Makai training, eventually being acknowledged by Tsubasa a real person when she performs a painful Makai version of blood transfusion to dilute Legules's poison within Rin as there is not enough time to obtain a Barankas fruit. After Legules is slain, Jabi decides to stay at Kantai as she has found someone she feels strongly to protect in Rin.

Jabi was a student under Makai Priest Amon and was a former childhood playmate with Kouga. She and Kouga trained together but went their separate ways during their teenage years. Jabi is a sensually aggressive woman and wants to be a good woman rather than being a talented Makai Priest. She carries two Madō brushes to summon electrical attacks and has two red Makai flags used to ward off certain magical attacks. Unlike Kouga, Jabi never found someone for herself to protect.

By the time the two crossed paths, Jabi was framed with the murder of her mentor and had stolen the purified Horror blades due to being forcibly repatriated. Though Kouga believed she wasn't responsible for the murder, Jabi was unable to trust him because Amon's murderer was a Makai Knight. But once able to trust him again, yet knowing she can not have him, Jabi reveals the Eastern Watchdogs' true nature before agreeing to Kouga enter the Crimson Forest once they deal with the Horror Blades. When she and Kouga attempted to perform the Force Repatriation on their own, Jabi was seemingly killed by a surprise attack from Kodama, vaporized with only her Madō Brush remaining.

Demon Beast of the Midnight Sun

In Garo Special: Beast of the Midnight Sun, it's revealed Jabi's body wasn't destroyed as presumed, but was recovered and incubating inside the Makai Tree, still alive yet stuck between life and death. Amon discovered the complication and dispatched Rin to help him inform Kouga that only a person with a strong bond with her can awaken her and bring her back to the living. With the help of Rin, he was able to enter the Makai Forest and fought his way to free Jabi. Jabi has since taken a liking to Rin and assisted Rin in her Makai training. Tsubasa didn't acknowledge Jabi as a real person at first and being the un-shy girl that she is she made Tsubasa feel her breast for a heartbeat and the breath from her lips. Garai took Jabi to examine the Phosphorus Arrow and realized it's weakened. While the Makai Knights guarded the outside premises, Jabi would restore the powers of the arrow with her powers. During Legules' night attack on Kantai, the Makai Knights were able to stall Legules enough for Jabi to restore the arrow and use it against Legules in combat. Legules' dark magic was too strong and Kouga jumped in to save Jabi.

Rin was poisoned by a bit shrapnel from Legules. Jabi decided to perform a Makai version of blood transfusion to dilute the poison within her because there wasn't enough time to use the Barankas fruit. The process was painful, but both survived the procedure. Tsubasa thanked Jabi for saving his little sister's life while still holding the Phosphorus Arrow. Legules took advantage of the moment and came out of Goruba to steal the arrow and kidnap Rin for his dark ceremony. Jabi and the knights entered the Abyss Forest and fought their way to save Rin. Jabi provided a great deal of support for Kouga but eventually pinned down by the Karakuri. When Kouga defeated Legules and destroyed the barrier, the Karakuri disappeared and Jabi lives another day. After the ordeal, Kouga wondered what Jabi’s plans are and she intends to stay at Kantai. She finally found someone she feels strongly to protect, Rin.

It is shown on Garo: Makai Senki that Jabi and Rekka had a close relationship before Rekka met Kouga. Though neither how/when they knew each other or what kind of relationship they had, Rekka shows a profound respect for Jabi indicating a master-pupil or a senpai-kouhai (veteran-beginner) partnership. The fact that they are able to do a combined attack against Sigma's minion hints to the second possibility. 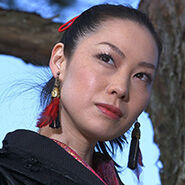