Karma the Demon Mirror Horror (魔鏡ホラー カルマ, Makyō Horā Karuma) is an Apostle Horror that appeared as the main antagonist in the events of Red Requiem.

Unlike other Horrors, Karma lives in a mirror rather than in a human host, though she can turn a human into a Horror familiar should their darkness be great enough. She consumes human souls by showing them illusions of their greatest desires, drawing them into her mirror realm and turning them into piles of broken mirror shards to ingest them. Among her victims are an untold number of Makai Knights who came to slay her, only to be defeated and devoured. Karma is able to jump from a mirror to mirror if the one she is currently housed in is destroyed. The sorrows and hatreds of people consumed by her are used for her as childlike Warashi (ワラシ, Warashi) and the shadowy Mercenaries of the Demon Mirror (魔鏡の傭兵, Makyō no Yōhei).

Karma was among legendary Horror that vanquished many Makai Knights and hoards their souls within her mirror realm as trophy. Among them happened to be Kengi, the nameless Knight who happened to be Rekka's father. Ironically, this action was a terrible mistake that would led to her downfall when combating Garo later on.

Sometime prior to the events of Red Requiem, Karma sensed Kurusu's sorrow and denial upon the death of his lover Shion. And so, she revived her out of the corpse of the very woman he just killed in return of his servitude. Yet, rather than the one he knows, the resurrected Shion is just a living corpse animated by her Horror thrall, but Kurusu doesn't care.

Eventually, as she was forced to fight Garo, Karma assumes a giant mirror-shard themed harpy form while trying to convince Garo to swear loyalty to her in return for immortality. However, empowered by the fallen Makai Knights' souls within the realm, Garo destroys Karma. 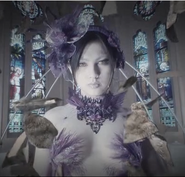