Kiba is the black corrupted Makai Armor that specializes in longsword combat that is in the possession of Barago, the main antagonist in GARO. Whoever wields the armor shall take the title of Kiba the Dark Knight (, Ankoku Kishi Kiba, "Fang") along with Black Fang (黒牙, Kokuga) & Black Wolf (黒狼, Kokuro). The evil Qi of the armor (taking on the persona of Barago) is the true antagonist of Moonbow Traveler.

Barago was a title-less knight and should've been given a Metal Armor to befit his station. However, he acquired a black armor (suggestively inherited from his father) and trained under Taiga Saejima (Golden Knight Garo) without gaining any notoriety nor official title. After Barago made the dark pact with Messiah, the mysterious black armor was reformed and dubbed Kiba (fang).

The Kiba armor is a unique one as it's a tainted version of the armor and bonded to Barago. While the majority of armors utilizes a makai blade to activate its halo for armor summoning, Barago has an heirloom necklace. He blows into it to activate its power and twirl on top of himself to wear his armor. However, he can bypass the whole process by willing his armor to come to him in emergency situations.

As he surpassed his beast form, the armor no longer adheres to the 99.9 seconds time limit. Whenever Kiba slays a horror, the armor can absorb the dark energies of the demon beast and use it to bolster its speed and power. So physically strong that Kiba has the strength to overpower a giant Horror with one hand with ease. With a single dash, he can go across the field as if he's flying and leap over tall bounds. By striking the earth with his sword, he can summon a plant shield that immediately grows around him to protect him. Although meant to be the opposite of Garo, there are similarities to Garo.

Due to the fact, Barago trained under Taiga, the former Garo, his combat style is based on the Saejima family combat style. Kiba's sword is much like Garo's sword, but black; it doesn't need a Madōba like Garo. Kiba has its own stead, Raigō, for horseback combat, but it's rarely summoned. Kiba can enlarge his sword without Raigō. Preferring to minimize the use of external tools, Barago doesn't carry a Madō Lighter. Traditional knights would use it for blazing armament, but Barago prefers the friction of his own armor to achieve the same effect. As he no longer needs the lighter to detect Horrors, it's not needed.

One un-clarified aspect of Kiba is the aftermath of Barago's death. After Messiah devoured Barago, his armor returned from the Makai World, fully capable of combat. When Rei and Kouga asked how Barago survived, the dark knight claimed to be only Kiba. Suggestively, the armor became sentient and returned to exact revenge. It's not clear did Messiah had a hand to the armor's sentience or did the armor became sentient after Barago's many years of absorbing dark energies, or the armor's sentience being the result of it carrying Barago's will and hatred. Moonbow Traveler confirmed the latter to be the case, as despite of the-then repentant Barago eventually reincarnated after making amends with Taiga in the afterlife, his residual evil Qi in the destroyed Kiba not only coalesced into a dark entity bearing the likeness of his Ryuzaki persona, but also restored the armor. Despite being the evil Qi-based clone of Barago and even able to summon Kiba in the same vein with the original, he lacked his original self's power and speed and eventually defeated twice. As the clone's existence is tied to Kiba armor, destroying it will ensure his destruction.

In GARO, it is explained the armor is linked with Messiah. In a makai tome, there's a chapter on the Dark Knight: The one stained in darkness, the Dark Knight. When he devours his thousandth Horror, he will summon Messiah from the Makai World to fuse with her. When fused with Messiah, the Dark Knight will become an immortal being; no amount of makai power can stop him. According to Gonza, to become the Dark Knight, it involves acquiring a spell written in the Forbidden Dark Magic Tome. By reading the dark magical tome, it allows a knight (that has been turned into a Lost Soul Beast) to be able to obtain ultimate power from the darkness. Every time a Horror is devoured, his power is increased and amplified.

The Kiba Armor was a pre-existing Makai Armor that has surpassed it's Lost Soul Beast form. Barago acquired his armor before becoming Kiba, but it’s unclear how he got it. While not confirmed, events in KIBA: Dark Knight Side Story suggest the armor belonged to Barago's father and Barago inherited it after the nameless knight died battling Horrors.

Barago was on a quest to obtain great power through the darkness. A shadow of Messiah had resided within the Forbidden Dark Magic Tome. After Messiah sensed Barago's desperation for power, she appeared before him and offered to merge with him and give him absolute power. However, to attain that power, he had to prove his mettle by overcoming his Lost Soul Beast form. In Barago's own account, the armor itself was not an enhancement from Messiah nor a spell. It was a new form after following Messiah's instruction to overcome the limits of his armor. By overcoming the devouring nature of soul metal, it can change the physical state of the armor to allow him to devour Horrors to increase and amplify his power. Determined to become the strongest, Barago overcame his lost soul beast form and the armor adapted a new permanent form that has no time limit and increased his speed and power. Messiah would rename his armor and title as Kiba the Dark Knight.

By this explanation, any knight that knows the process can surpass their lost soul beast form and replicate another Kiba without Messiah’s intervention. With the same logic, from events in The Makai Flower, enough will of light can create an opposite version: The Light Awakening Beast Form. However, only Raiga Saejima was the only known knight to surpass the Lost Soul Beast form without getting devoured by their armor and turned to darkness. Suggestively, the armor bonded with Barago and even developed a corrupt personality. Ultimately, the Kiba Armor is a rename over the old armor and its full capabilities remain a mystery. It was the most powerful corrupted armor of its time, but not the ultimate as described.

Also known as Heart Destruction Beast Form Kiba, this was the form Barago takes after he surpasses his 99.9 secs time limit. However, he surpassed the corrupted armor's devouring nature through his inner darkness as per Messiah's instruction and became Kiba, giving his armor its current grotesque appearance and warping its Soul Metal composition into its Death Metal state.


In a world where Barago never turned to the dark side and successfully became a full-fledged Makai Knight under Taiga's tutelage, it shows the armor's alternate potential. This alternate version highlights some of the armor's previous appearance before being consumed by the Lost Soul Form. This armor is golden like Garo, possibly a sister armor with the difference that Kiba was meant to possess a Halberd-oriented fighting style instead of swordsmanship skills in the same vein with the former. Much like Garo, its golden appearance is a decorative feature which emphasized its dignified form compared to its corrupted state, however, information on the armor is limited.


It's the fusion between the Kiba armor and the armor of the once believed strongest knight Ouga. In this form Kiba gains a pair of wings that boost his mobility, along the ability to control bladed wires projected from the armor as a pair of extra limbs as well as projecting rainbow-colored force-field derived from Ouga's energy manipulation powers.

How the armor was made is unknown. However, what is known is that the armor physically resembled Garo, only dark in appearance. Those that know the legend of the Dark Knight, it was thought that the dark armor was given by Messiah. However, that was later proven to untrue. In the origin tales of Kiba, it was suggested that Barago inherited the armor from his fallen father. A nameless knight, Barago's father was killed while fighting horrors. Barago likely inherited the armor and became another nameless knight. Alternatively, it could've been an armor given by Taiga as the silver armor suspiciously looks like a dark replica of Garo. Regardless of how the armor was acquired, the armor wasn't special until it was anointed it as Kiba.

After Barago found the Forbidden Dark Magic Tome, a shadow of Messiah revealed herself to make a contract with Barago: he will devour 1,000 Horrors and merge with her to become an ultimate being of power. After the agreement, Messiah instructed Barago to overcome his armor's time limit, to become a Lost Soul Beast, and surpass it. She anointed Barago and his armor as Kiba The Dark Knight. After overcoming his Lost Soul Beast form, Barago's armor adapted to a new form, making it truly Kiba.

The flashback of the moment when Barago attempted to overcome his armor's limit revealed that the event was witnessed by Taiga Saejima. Taiga attempted to stop Barago out of believing he unknowingly lose himself and triggered his Lost Soul Transformation, but in actuality, Barago overcomes the limit of his armor on purpose. Barago managed to surpass the armor's limit and complete its transformation into Kiba in time before fleeing the scene. 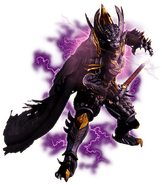 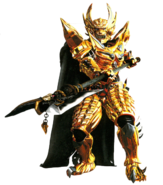 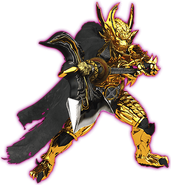