Kodama (コダマ, Kodama) is the mute servant and adopted son of Gulm appearing in GARO, acting as a tertiary antagonist.

Much about Kodama's origins are unknown, only that he was adopted by Gulm and can't speak. Kodama serves Gulm, carrying out their orders and protecting them from harm. He's highly skilled in martial arts and his abilities can rival a Makai Priest or Makai Knight. While not a Makai Knight, he has his own armor, a Demon Beast Armor which granted him title Demon Beast Armor Kodama (魔獣装甲コダマ, Majū Sōkō Kodama) along with abilities to rival an armored Makai Knight. 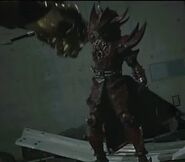