A middle-aged prostitute with a violent streak, Kotomi is encountered by Kouga Saejima while he was Horror hunting in a cemetery where she was beating up a man and her competition for their money. After Kouga runs off once deeming her human with his Madō Lighter, Kotomi is quickly possessed by Utoque. But rather than completely destroy her spirit, the Horror forms a symbiosis with Kotomi: making her young and beautiful in return to use her skill to lure men for the Horror to suck the lives out of through Kotomi's eyes.

When Kaoru Mitsuki ends up witnesses Kotomi killing her employer as she showed up a bartender job, Utoque is stirred by the Horror blood stigma on the girl, and chases her to the harbor. Unfortunately, Utoque runs into Kouga and ends up being slain by him. Though the Horror is dead, Kotomi is barely alive and pleas Kouga to help her as she resumes her true form. But Kouga explains to Kotomi that she is already dead the moment Horror possessed as her body soon disintegrates. 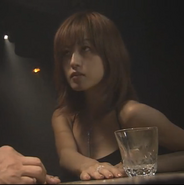 Kotomi in her prime