Leo Fudō (布道 レオ, Fudō Leo) is a Makai Priest and Makai Knight in the events of Makai Flash Knight. He's a priest prodigy and nicknamed the second coming of Amon for his creation of the Gōryū. His successes promoted him to be a priest of the Senate and personal assistant to Kouga Saejima. It was only later that he is revealed to be Lord the Flash Knight, wielder of the Makai Armor Lord and Madō Ring Eruba.

Leo is the chosen successor of Lord the Flash Knight. Trained to be a Makai Knight along with his elder twin brother, Leo always believed Sigma's greater combat talents would default him as the next Lord. With Sigma's influence, Leo found interest in magic and the two also studied magic as Sigma welcomes Leo as his future support priest. However, it was an unexpected turn when his father, Gōki Fudō, chose Leo instead. Leo was blinded by his love and loyalty for Sigma to not realize something Gōki saw, there was darkness in him; Gōki chose Leo as his successor because he has the heart of the protector. Unable to accept his role as a knight, Leo pursued a life of priesthood until a fateful encounter with Sigma once more

Sigma returned to Leo after both had become accomplished priests. Ambitious with his creation, Idea, Sigma teamed up with Priestess Mio (Sigma's girlfriend, but also Leo's love interest) to help bring his creation to life. However, when Mio discovered Sigma's dark experiments, she tried to stop him at the cost of her life. Holding her lifeless body, Leo kept Mio's brush and vowed to stop his brother; he chose to handle this matter privately as he feels responsible for Sigma.

With the success of his Gouryuu, Leo became a prominent priest of the Senate and a personal support priest for Garo. However, in secret, Leo was discreetly tracking his brother. Because nobody knew the Red Mask was really Sigma, Leo got in trouble for Sigma's actions as everyone suspected Leo instead of Sigma. It wasn't until when Leo finally embraced being Lord and openly resisted Sigma that Leo exonerated himself. After accepting his knighthood and helped in destroying Idea, Leo found closure to Mio's death after she appeared before him in happiness for his efforts.

The Path to Knighthood & Inheriting Lord

Since they were little, Leo and Sigma were harshly trained by their father, Gōki Fudō, to compete for the title of Flash Knight Lord. However, despite being twins, Sigma had always been clearly the better fighter and both brothers assumed that Sigma would become Lord and Leo would lose the title. However, Leo never felt embittered by it and fully supported his brother to become Lord. However, their interests would change after being exposed to magic.

Despite the harshness of their training, Sigma always loved his brother and introduced him to magic. Somewhere in between training, Sigma showed Leo how to do magic. Eventually, Leo believed he would be better to serve his brother as his support priest. And so Leo double-majored in magical arts along with his knight training. Upon the day Sigma would inherit his birthright, everything changed for both of them.

Gōki realized that despite Sigma's talents, he had a dark nature about him that didn't suit him as Lord; he decided to make Leo his successor instead. However, both brothers were upset at the decision. Sigma was enraged that Gōki denied him his right to become a knight and even attacked his father in a rage, to demand an answer. Leo was caught in the middle of all this as he insisted Sigma should be the successor instead of himself. After Sigma left, both Leo and Gōki clashed over this matter and Gōki explained Sigma didn't have the heart of a protector and his decision on making him Lord was final. Not long after, Gōki died, making Leo his surviving successor; both brothers would walk the path as priests. 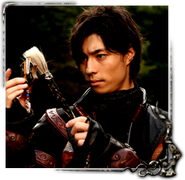