Light Awakening Beast (光覚獣身牙狼, Kōkaku Jūshin) is a unique form a Makai Knight can achieve through rekindling his inner light while in Lost Soul Beast state. So far only Raiga Saejima has managed to attain this form, where it is known as Luminous Beast Form Garo.

Light Awakening Beast is a form a Makai Knight may acquire if he has managed to rekindle the light within after undergoing Lost Soul Beast transformation. It is a difficult feat; as throughout Lost Soul Beast state, a Knight is not only overwhelmed by feelings of anger and hate, but also warped by Soul Metal as their armor ravages them from the inside out. It is known that Makai Priests who forged Makai Armors devised a failsafe within an armor's emblem so that one could forcefully undo the Knight's twisted transformation by hitting it with a sufficient amount of force, but the Knight himself could also purify his twisted form into a more majestic one provided he had enough inner light to do so. This could be done by calling upon a significant memory to strengthen resolve, especially with something that served as a trigger for the memory in question. Should the Knight succeed in this, his armor would then assume an upgraded state with traits derived from its previous monstrous form.

Up to date, only Raiga has managed to attain this form, known as Luminous Beast Form Garo. Before Mayuri accidentally dropped Akari's bell onto the head of his Lost Soul Beast form, Raiga attempted to reverse the Lost Soul Beast transformation to no avail. This was in part due to the legendary Horror, Eyrith, who not only drained Garo of its remaining time limit, but also seemingly controlled his twisted form like a puppet against Eiji, Crow, and Bikū. The feelings he and Akari filled inside the bell allowed the Golden Knight to recall the late Makai Priestess and her promise of support and blessing throughout his training under the tutelage of Silver Knight Zero, Rei Suzumura. Fueled by such a memory, Raiga purifies and transforms Garo, even turning the Garoken into a wolf-themed great sword with which to strike Eyrith down. 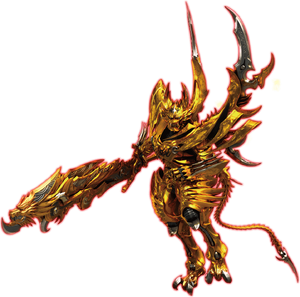 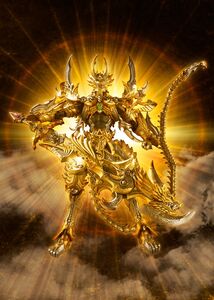