Lost Soul Beast or Heart of Destruction is a physical state when a Makai Knight and their armor have gone beyond their time limit.

All Makai Armors have a 99.9 seconds time limit in using their armor. When they go beyond that time limit, their armor's core switch retracts and begins to corrupt the knight. During the intermission and metamorphosis, the armor begins to feed dark energies into the knight and turns him into a giant armored werewolf-like creature. Blinded by hate and rage, the knight will have lost all sense of self and attack friend and foe alike. Most of the time though, the beast has a focused point of rage and takes it out on the intended target. The lost soul beast form is usually an act of desperation as it grants the knight a massive boost in combat power. Its physical power is great enough to rival the physical strength of a dragon. It can defy gravity, increased physical power, agility, and blades throughout its body to tear anything apart.

An additional feature (seen in Dragon Blood) is that the lost soul beast form can even take the physical traits of its target. By biting and tasting the blood of its enemy, it can take on its genetic features and adapt a stronger combat form in seconds. When the Silver Knight became a lost soul beast, every body part it has tasted blood from Loop allowed Zero to adapt physical dragon traits. However, it's unclear is this ability unique to Zero's armor or a general feature only shown now.

In Makai no Hana, it was shown that rage of knights who had turned into Lost Soul Beast can be redirected to unintended targets. However, so far only Eyrith who managed to perform this feat by sucking time limit of Raiga' Garo armor. But due to the same circumstances, Raiga didn't completely lose himself into rage and struggle to rekindle his light while Lost Soul Beast form of his armor attacks his allies, even cried out for his friends to run at that point.

The blacksmiths that forged these armors weren't foolish. They knew that a knight might become corrupted and created an emergency reset feature in all of them. Their core switch needs to be struck with great force. Only by hitting the switch hard enough or damaging the core switch would cause the armor to normalize and retract from its user. If done correctly, the knight returns to normal. If not, the knight can either become corrupted or devoured by the armor.

Kiba's armor was the result of Barago figuring out a way to tame the lost soul beast form. By mastering beyond the limits of the armor, it changed Barago into a stronger being that can now devour Horrors to increase his power. Alternatively, if one has enough light inside of themselves, they can also create a new shining form called Light Awakening Beast. However, since overcoming the beast form is rare, it's considered a safer bet to reset that armor than attempt to master the lost beast form.

Lost Soul Beast form doesn't seem to exist in this universe. They never seem to have a time limit, but still limit their use of the armor due to some unexplained negative effect. There has yet to be a single instance a knight losing themselves to become a beast.

Makai armor's rules are slightly different in the anime universe in spite of primarily taking aspects of Original Series. The exact official time limit for the Makai Armors is unclear, as sole means to measure it was with flames that appear in Inari's throne as seen in The Crimson Moon— as the time gets closer to expire, the flames begin to die out until there's complete darkness. When this happens, the armor begins to compress the user, alarming him that he will transform. As such, the knight is encouraged to use their armors sparingly. With great will power and physical strength, a knight can only delay its effects to prevent the transformation for a short time, but the armor will still put great strain in his body.

Aside going beyond the armor's time use, the Lost Soul Beast transformation can be triggered prematurely via user's great negative emotions. A knight must always maintain mental/emotional focus or can succumb to their own darkness. Even in darkness though, the armor is merely corrupted, but not exactly a Lost Soul Beast. In León's case, the flame seal of his mother, combined with great anger and hatred for the people that burned his mother, overwhelmed Zaruba's ability to maintain Garo's burning rage and it will manifest itself into the Lost Soul Beast form. However, the Golden Knight Raikou is an exception, as he gave rise to his demon beast form because of two factors: his armor's time limit and the negative emotions Ashiya Dōman created in him. In León's case, he can only be stopped by resetting or retracting the armor. But in Raikou's case, he can control his demon beast form and with Seimei's help, he can turn it into a more majestic form. Garo is the only one seen to be able to turn into that form as no other makai armor came close to matching the conditions to create its beast form. 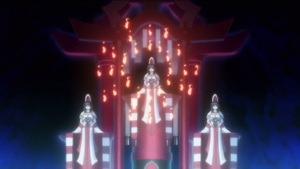