Madō Motorcycles are developed by Makai Alchemists of Makai Order based on mundane chopper motorcycles. With the advancements of science and technology in the modern world and the fact that Horrors will use it to gain advantages against the Makai Order over the course of the conflict between light and darkness, the Makai Order are prompted to integrate modern technology into their fight. During this point, they also discovered that Madōbas, bio-mechanical horses utilized by titled knights such as Garo, have some limitations compared to modern vehicles such as motorcycles. As result, the Order develops Madō Motorcycles for the titled Knights both to better combat Horrors and as mundane vehicles.

Madō Motorcycles are designed after chopper motorcycles, combining technology, magic, and alchemy which endowed them with abilities that make them double as combat vehicles against the forces of darkness. Because of it, these vehicles utilize Madō Flames as fuel and may be outfitted with weapons and/or gears for combat. For titled Makai Knights, their rides take an armored form complete with soul metal plating and unique abilities accessible in said form. Another key characteristic of the armored form is the emergence of a face in the front of the vehicle, which is most likely to be the madōgu controlling it. Suggestively, the modernization of the Makai World to better combat the darkness resulted in the titled Knights' original madōbas to be repurposed as combat armor and gear for their respective rides. Judging from observations, generic traits that madō motorcycle possess in armored forms are resistance to magical and physical punishment thanks to soul metal platings their armor composed of and a pair of retractable mechanical arms for grabbing foes. Sword's motorcycle is also designed so that Zaruba can control it and directly assist Garo in combat. 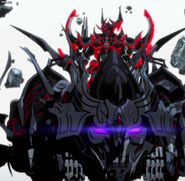 Luke's Motorcycle
Add a photo to this gallery
Retrieved from "https://garo.fandom.com/wiki/Mad%C5%8D_Motorcycle?oldid=17472"
Community content is available under CC-BY-SA unless otherwise noted.