Immortal (Sealed inside the Makai Realm)

Mendoza was an excommunicated Makai Alchemist that wanted to exact revenge upon the Makai Order and attain immortality in The Carved Seal of Flames.

Mendoza was once one of the top alchemist of the Makai Order, serving the Senate in magical affairs. Unfortunately, he was excommunicated when he created a forbidden Madōgu, Zirkel's Ring. The magical tool he created had the power over life and death, in addition to having influence over Horrors. However, Zirkel's Ring is fueled by human blood and it would require many lives to power the tool. The Order took offense to Mendoza's work as it was an affront against the sacred duty they upheld. While arrested, Mendoza revealed he had a god complex, believing their order should use their powers to be gods over mankind as they need their protection against the darkness. Believing Mendoza to be beyond redemption, he was excommunicated and branded with a cursed mark as a reminder of his crime. However, his exile only steeled his resolve to crave power.

Using his alchemy training, he helped cure an epidemic that won him favor in the Kingdom of Valiante. To expedite his value and rank within the royal court, he used Horrors to do his bidding to aid King Valiante in his campaigns. The king valued him so greatly that he gave him a beautiful wife to keep him at his side. Originally content with being the king's adviser and a husband, life was good for a time until he was reminded of his shame. When his wife gave birth to their child, the infant and himself revealed the magical curse the Order had given to him. Fueled by anger and shame, he murdered his family and refocused his rage upon the Makai Order.

Using his knowledge of the order, he used it against them to expose alleged witchcraft to the kingdom. Because the court had never seen the Makai Order, they were quick to believe Mendoza's words and attacked the very order that secretly protected them against the darkness. Using the Valiante's own military against the order, he intended to persecute as many people from the Order as possible and use their blood to fuel Zirkel's ring and raise his own legion of controlled Horrors. However, his vengeance wasn't just to punish the order, but also for immortality.

In Mendoza's final hours, he successfully merged with Anima to become an immortal being. No longer bound by the limitations of his mortal flesh, he had the powers of one of the most powerful Horrors in his new body and no knight could stop him. Although slowed down by Garo, Mendoza's god-like powers made him impervious to death and pain. It was ultimately the magical flames endowed to Garo that was used to seal him; the deceased Alchemist, Anna Luís had magically bonded her spirit onto her son via. her very own masterpiece, a special fiery seal originally placed to protect her son as she birth him while being burned at the stake. Deciding to protect her son, she left his body and transferred the same seal to Mendoza to imprison their nemesis in the Makai Realm. Mendoza was defeated, but is still alive in a excruciating cycle of death and resurrection, trapped by Anna's seal that also produces flames that perpetually burn him. Should the seal lost its power, Mendoza might revive once again.

Originally a Makai Alchemist, Mendoza served the Senate and believed the Makai Order should be revered as gods by humanity for having protected them from Horrors. But was excommunicated for creating Zirkel's Ring, a powerful Madō Tool that uses human blood to allow one to control Horrors. Combined with his apathy towards humans and ideals, Mendoza was branded with glowing red marks all over his body with his descendants cursed so his line would forever be banished from the Makai Order. During his wandering in exile, he came to the Kingdom of Valiante under the pretext of being a monk and entered the service of Fernando San Valiante. Medoza used his hidden talents as a Makai Priest to predict the outcomes of battles and to heal the sick during an epidemic. As a reward for his services, Fernando gave him a beautiful bride and a position as a royal advisor. But when his wife gave birth to their child, Medoza was reminded of his curse as he murdered his wife and child to spare them and the midwife to conceal his secret. After dumping the corpses into the sea, a hate-filled Mendoza vowed revenge on the Makai Order while plotting to revive the ancient Horror Anima and becoming the Horror's vessel to become a living god

Mendoza began his plan by poisoning Fernando and using the king's Catholic faith as an excuse to begin a systematic slaughter of residing Makai Knights and Priests under the cover of a witch hunt. With the assistance of his aide Octavia, who denounced Catholicism to follow him, and the Fallen Makai Knight Bernardo Dión, Mendoza manages to isolate Valiante from the Makai Order while having the Horrors under his control assume key positions in the country's government. Within a year's time, Mendoza tortured and executed hundreds of Makai practitioners in Valiante while trapping their souls within a crystal designed to resurrect Anima.

Among his victims was a pregnant Makai Priestess named Anna who was of the line of Makai Knights who bear the title of Garo. Mendoza proceeds to have Anna burned while she was giving birth to her son León Luís, her husband Germán Luís saving the infant after breaking out of his cell. After apologizing to the king for unforeseen events, Mendoza focuses on finding Germán to kill him and his son before the latter becomes a threat to his plans.

Seventeen years later, after a failed attempt by the Horror Metaclim and the soldiers in his service to kill a now teenaged León, Mendoza learns from Octavia of the golden cross pendant with the Garo emblem that prince Alfonso San Valiante received on his birthday from his mother. Furious to learn that a branch of the Garo line has not been noticed this whole time, Mendoza stages a coup d'état by poisoning the king and framing Queen Esmerelda for treason as Alfonso was forced to flee for his life. Mendoza later finds a tapestry of the Knight of Light and burns it.

Later, while facing Alfonso and León as they reach to Santa Bard, Mendoza ends up being unceremoniously and abruptly killed by Bloodmoon when he summoned the Horror to combat Alfonso after he is forced to relive his cousin of the Garo Armor. However, it's later revealed that he managed to save himself by warping out of the Horror's digestive tract via. unidentified forbidden spell at the last minute at the cost of some of his lifespan.

Now an elderly man, Mendoza continued his agenda from under Santa Bard castle with Octavia continued serving him. His success in cheating death was not unnoticed by Garm who then gives Germán the task to protect him despite knowing his true intentions. 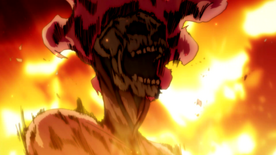 Despite Germán was perished in the attempt to stop him, Mendoza succeeds in reviving Anima and absorbing the Horror to become a living god. In a final gambit to stop Mendoza from wrecking havoc on the world with his new power, León dragged the fallen Makai Alchemist into the Makai Realm where the Horrors originate from. It was there in Makai Realm that Anna's spirit made her presence known and moved the protective seal she originally placed on her son to their empowered nemesis, repurposing her masterpiece — the very thing that keep León away from harm all this time — into both near-unbreakable binding and instrument of torture that keep Mendoza trapped for all of eternity. To add insult to injury, Mendoza's inability to die means that he would be inthe state of perpetual agony thanks to the seal's flames constantly burning him. Moreover, the fact that Germán's spirit managed to break free from the construct used to reawaken the very legendary Horror the mad Makai Alchemist absorbed thanks to Anna's interference means the rest of his fellow Knights and Alchemists' within would likely follow also and pass on thus stripping him of his accumulated power as an immortal.