Deceased
(Devoured by her own Demon Beast Armor)

Octavia is a servant within the Kingdom of Valiante in the events of The Carved Seal of Flames. While she serves the royal court and the Valiante family, she's secretly Mendoza's loyalist and fought to protect his interests.

Octavia was once a normal resident of a village in Valiante until the day she renounced her faith in God the day her parents and sisters were torn to pieces by wolves before her eyes. Before then, she questioned her own faith at times with her sister occasionally reprimanded her for it. Even in her would be last moments, Octavia's sister stated that God would save them when wolves begin to slaughter everyone in their home. Octavia did tried to ask her fellow villagers for help, but as soon as they reached her home, the mob ended up fled in terror and subsequently left Octavia to her fate.

But then, Mendoza came to her rescue, using the "power of the devil" to do so and avenge her family — a contrast to her fellow villagers who even implied to abandon the village and forget them all in their trauma over the incident. Awed by his display of might and in his gratitude, Octavia became a fanatic to the excommunicated Makai Priest and his cause. Mendoza accepted her as his new acolyte on the condition that she never touched him.

Now a Mendoza's right hand who posed as one of Kingdom of Valiante's house keepers, Octavia is one of the few people to know the truth of the witch hunt that killed various Makai Knights and Priests. It is her who alarmed her master about Valiante family's ties with Garo upon noticing Alfonso inheriting the necklace with the Golden Knight's insignia. She covertly participated in the coup starting by framing Esmeralda of her own husband and king Fernando's poisoning which forced Alfonso to flee the kingdom with Mendoza's Horror thralls pursuing him, but failed to have the prince killed thanks to Rafael's interference.

Even after Mendoza's assumed death during Blood Moon and Lost Soul Beast León incident, Octavia continues to serve at the palace as no one is aware of her involvement with her master's plans. She secretly visited the survived Mendoza from time to time during which the spell that allowed him to survive Bloodmoon's attack revealed to have reduced him into an elderly version of himself. The major blow from the loss of Bernardo and Black Knights as well as the abrupt end of their witch hunt campaign proved insignificant for them as they already about to reach their endgame at that point.

When placed in a situation were her association with Mendoza would be exposed, cursing being left with no alternative, Octavia is forced to sacrifice her right leg to the summoned Horror Resume to avoid being discovered by Alfonso San Valiante, Ema Guzmán, and León Luís.

Later, fueled by her hatred of Makai Knights, Octavia uses the power of Mendoza's staff to transform herself into a monster as the ultimate sign of her devotion to Mendoza. Ultimately, Octavia is killed by Ema after inflicting a wound on her. 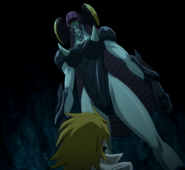