Rangrien was a Horror that possessed the body of Marie Ripley, the younger sister of Father Thomas Ripley.

Despite becoming a Horror, Marie still retains her kind personality and has shown to blush when Sword gave her flowers.

Rangrien takes hold of its host after Marie is imprisoned and tortured by her brother, who was strongly implied to have had incestuous feelings for her and began his abuse after a potential suitor gave her a bouquet.

After hearing about the Ripleys, Sophie finds Marie while she was gardening and the two of them chat and quickly become friends. They are then interrupted by the sudden arrival of Sword, who seemingly brought Marie flowers trying to gain her affection. While having dinner with Sophie, Marie starts to hold Sophie's hand tighly while recalling what her brother did to him. Sophie escapes and locks herself in the basement where Marie was tortured, but Marie tears her way in and turns into Rangrien. Rangrien tries to attack Sophie, but she is stopped by the arrival of Sword. The Horror is defeated by a combination of Sophie dropping a church bell on it and a single stroke of Garo's blade. 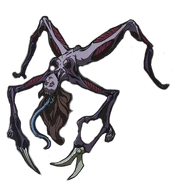 Retrieved from "https://garo.fandom.com/wiki/Rangrien?oldid=17867"
Community content is available under CC-BY-SA unless otherwise noted.