It's presumed Dr. Tategami aspired to improve his medical skills and become a miracle worker in the process as opposed of a mere talented doctor he originally was. Regardless of what motivated him, such aspiration unfortunately turned into an obsession which as bad as that of Pazuzu's previous host who may very well a doctor like him. Not surprisingly, the Horror Pazuzu eventually merged with him for he shared the same inner darkness as the latter.

Having appeared around Taiga's time as Garo, Pazuzu took over the body of a surgeon named Ryōichi Tategami. Taking advantage of his host's profession, Pazuzu turned Dr. Tategami into a miracle worker of a surgeon to feed on the euphoria-enriched blood of Tategami's patients. Explaining that his actions are no different to various methods humans used with certain animals, Pazuzu disembowels his victims to get the blood and leave the remains for his Horror minions who have possessed the medical staff. To ensure he could eat without interference, Pazuzu erects a barrier to put any Makai Knight at a disadvantage. Learning of Pazuzu, Kouga Saejima has trouble dealing with him until he uses Kaoru to remove the seals that power the barrier to regain the advantage and destroy all the Horrors in the hospital. Upon Pazuzu's last moments, he pleas to devour Kaoru as his last meal. Utterly repulsed by this idea, Garo delivers the final blow, thus ending his reign of terror. 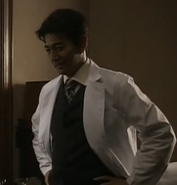