Nashiko Momotsuki
Shuka (朱伽（シュカ), Shuka) is a humanoid data-based Madōgu in GARO: Versus Road where she was one of the major secondary antagonists.

Shuka is arguably a one-of-a-kind madōgu in form of A.I. whose body comprised of data specifically designed by Shousetsu as the "navigator" for the "Knights", participants of the Versus Road and the one who explained rules of each round of the death game. As such, she was expected to be emotionless to the point of seemingly apathetic and cold. Yet, like any self-aware A.I. and in lesser extent, other sentient madōgu in other universes, she possessed the capacity to learn, a double-edged feature that allows her to potentially develop conscience equal to, if not close to that of human. Such feature explained her barely noticeable glitches when Kuon declared that he never asked to be the heir of Garo, let alone becoming a hero. Unfortunately for her, Shousetsu immediately destroyed her as soon as she became too human-like.

After the 100 players or "knights" gathered inside Versus Road (which secretly a hall that happened to be one of many configurations of the Monastery's labyrinth), she informs them about game's one and only objective: to summon the golden armor and to earn its title. Once she answered whatever doubts the players had, she signaled the start of Round 1. She appears again in Round 2 informing the players about their task and explaining the usage of "items", which can turn into any item that the user wishes for. She transforms her item into a handbell, and starts sending out players to the location of Round 2. When there was only 30 minutes left, she reminded the players about their time limit and periodically kept reminding them as the time diminished.

During the Round 3, it becomes increasingly apparent that she's not like what she seemed; when Taisuke inquired her about the fate of those who perished throughout the death game, she indifferently revealed their grisly fate and forced them to continue the deadly competition. This further exacerbated by her lack of emotion during Hoshiai's sacrifice and displayed total indifference when Kuon expressed his disillusionment over the game.

At the end of Round 4, Shuka reacts with surprise and curiosity when Kuon rejects the prize of Garo as well as the game they're playing. Shōsetsu hints at her having "regained consciousness," implying she's under some sort of control.

Shuka is finally terminated when she tries and fails to warn Kuon about the true nature of Garo when he rejects killing Amou, done away with by Shōsetsu Hagiri.

Shōsetsu Hagiri: Shuka's increasing bewildered reactions to Kuon's hesitancy to kill does not go un-noticed by Hagiri, who implies she's either developing a heart or under a charm of some sort. Alas, this ends up mattering little as she's terminated by Shōsetsu before she can reveal how Garo chooses its wielder. 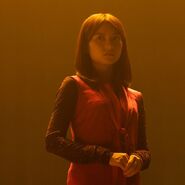