Like Jinga, he was trained from a young age to become a Makai Knight. While he was physically capable, it wasn't shown if he was able to wield Soul Metal blades. Tōma's life was marked by a tragedy when their father was possessed by a Horror, but at that time, he mistook his brother as the one who became a Horror and tried to stop him, only to be knocked out of the way and witnessed Jinga reluctantly killing their father. The trauma from witnessing his brother killing their father was so great that Jinga was forced to have Yōyū seal his memories pertaining that night. For a time, Tōma remained oblivious of the tragedy that had passed and was eventually able to recover. However, in a disastrous Horror hunt, Tōma ended up possessed by a Horror when Fons made him regain the memories of that night, but in the end, Jinga is able to turn back Tōma into a human again.

The following day, Tōma learned the whole truth about his parents' death from Jinga, who felt that his little brother deserved to know their father's sudden fall into darkness instead of keeping him in the dark as before and that it was important for his growth as a Makai Knight.

Tōma, along with his brother Jinga, was born from the Mikage family where they both spent their youth training to become Makai Knight like their father Mizuto. Unfortunately, their life was marked with a tragedy when Jinga was forced to kill Mizuto who became a Horror for an unspecified reason and had killed his wife in front of Jinga. Seeing their mother's blood stained Jinga's body, Tōma had mistaken Jinga to be a Horror and tried to stop him, only for Jinga pushing him aside and dealing the killing blow. The event traumatized Toma so much that Yōyū, a friend of their father, decided to wipe his memories regarding that night. He was under the care of Yōyū for half a year.

With his traumatic memories wiped and having no first hand experience of dealing with the Horror menace, he was overconfident of his abilities and was very eager to go on Horror-slaying missions with the older duo, despite him being clearly unprepared both physically and mentally. Concerned about Tōma's over-eagerness and ignorance of how horrifying Horrors can be, Jinga and Fūsa took him with them to investigate an abandoned building infested by multiple Horrors. The mission quickly overwhelmed Tōma and renders him in a panicked state, but he is able to steady himself nonetheless due to encouragement from Jinga and Fūsa. Going against his brother's orders to stay put, he barged into a room where the Horror Fons laid waiting. His suppressed memories were soon revived by Fons, overwhelming him and opening him for possession. Tōma became a Horror, intending to kill Jinga and avenge their parents, but he was soon slain by a reluctant and painful Jinga.

Tōma was later shown to be alive, with the Horror exorcised and returned to a human being, becoming possibly the first member of the Makai community to return as a human after a Horror possession, and confirming Jinga's newfound mysterious ability. Jinga chooses not to wipe his brother's memories of the ordeal and he deems it important for Toma's growth, with Tōma reasserting his vow to become a Makai Knight and never again to fall victim to such a situation. 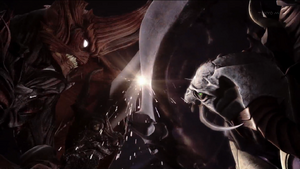 Towards the end of the show, a mentally broken Jinga kills Fūsa. Enraged that his own brother would slay Fūsa, Tōma charged at him as time began to slow down. The Horror Jinga erected a barrier and revealed himself as the true mastermind behind everything that has ever happened to them. Every person that his brother thought he saved returned as Horrors and devoured even more people. Jinga explained that Makai Knights often slew horrors too quickly and he wanted to extend their duration so they can taste better. Jinga lowered the barrier to allow Tōma to face his brother. In his moment of rage, Tōma became a Horror again and began killing Horrors and knights alike while absorbing their darkness. Now with a stronger form, Tōma faced the newly revived Jinga, who killed his brother to do so. The two Horrors flew towards the sky, where they clashed evenly, with Jinga enjoying every moment of their fight. In the end, Jinga gets the upper hand and knocks down Tōma to the ground where he finally slices him off and tastes "victory".