Takeru Jakuzure (蛇崩 猛竜, Jakuzure Takeru) is a Makai Knight in the events of The One Who Shines in the Darkness of the Ryūga-verse. He's Zen the Flame Sword Knight and works under Makai Priest Burai in Volcity. Takeru later returns in Fang of God to help .

Takeru is a young and immature makai knight; he speaks with the tone of a thug and often over-plays his limited capabilities with his big ego. Although he has inherited the titled armor, Zen, he doesn't take his knighthood seriously. A mixture of brash and a romantic, Takeru strives to become a better person.

Suggestively, Takeru suffers from an emptiness in his life and seeks the comfort of women to fill that void. Because of his great weakness for beautiful women, Takeru is easily distracted from his duties and unnecessarily put himself in danger. However, underneath all of it, he has the heart of a protector willing to make necessary sacrifices for the greater good.

To save Garo from becoming another Madō Horror, he stopped the siring process by shielding Ryūga with his hand. To prevent himself from becoming a horror, he chopped off his own right hand off to prevent Zedom's sapling from fully turning him. Although he lost his hand (later given a prosthetic), he had no regrets saving his friend and teammate. After falling in love with Rui Suzaki and protecting her against Horrors, he developed a more mature mentality and promised to be a better man in her name.

By the events of Fang of God, Takeru displayed a greater focus in combat and seriousness in his knighthood. His womanizing nature seems to have subsided as he didn't try to flirt nor try to sleep with any woman. However, he still enjoys making fun of the people around him. Overall, Takeru is formidable protector that's still maturing as a knight.

The One Who Shines in the Darkness

Makai Priest Burai had summoned three Makai Knights to Volcity: Ryūga Dōgai, Takeru Jakuzure, and Aguri Kusugami. Takeru and Aguri arrived in Volcity ahead of Ryūga and waited for his arrival at their secret lair until he arrived. The knights and Burai decided to observe Ryūga once he entered the city. Upon his first day, Ryūga already caused a ruckus as he publicly murdered a bride (a Horror in disguise) and gained the attention of the private security force, SG1. After Ryūga escaped capture, the knights found him at a park, being attacked by the true form of the "Bride Horror," an infested bouquet of flowers. After Burai destroyed the horror with his pet, Raigo, Takeru introduced himself, but Ryūga was less ecstatic about the matter as he found out it was Burai that called him.

Takeru returns in this film, being assaulted by a gang. After letting them wail on him for a bit, Takeru reveals that he let himself be captured to assassinate their Horror leader and effortlessly knocks out the other thugs. After killing the Horror he was assigned to, a mysterious figure attacks him and demands that he hand over the Zen Armor to them. He denies their request and a fight ensues. The figure forces an involuntary transformation and seizes the Zen armor mid-summon; Takeru only stopped from retaliating by, of all people, Aguri Kusugami.

Enraged by the loss of his Armor, Takeru warns the Watchdog Center of his plight before reuniting with Ryūga. The two and Rian are tasked with locating a Horror nest in the area. However, the Horror nest was merely a trap that allowed the mysterious figure, Banbi, to seize Ryūga's armor as well. Now reunited with Aguri, Takeru and Ryūga learn of Banbi's plan to resurrect her dead lover for one night and apparently required the Armors to do so. Takeru joins them in an attempt to prevent the ritual, but is too late and is defeated alongside the others by the newly-revived Jinga.

Takeru and others soon learn of the Fang of God and the Horrors' attempt to utilize it for immortality. He joins the assault on their make-shift compound, battling Rinza's Horror troupe alongside Aguri, Rian, and Ryūga, culminating in a direct confrontation with Rinza herself. Despite their lack of Makai Armor, he and Ryūga provide the distraction needed for Aguri to fire the killing arrow.

He and the others eventually confront Jinga himself. However, everyone other than Ryūga is caught in a time-distortion caused by the Fang of God. Rian stabilizes the distortion, but the time wasted prevents them from doing little other than watch as Jinga and Garo battle it out in the cosmic skies. Eventually, the group reaches the interior of the Fang of God, allowing Takeru to witness the final blow that ends Jinga courtesy of Garo. After the events of the film, Takeru returns to his duties as a Knight; separating from the group once more. 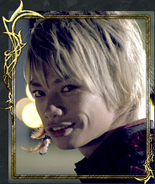 Takeru during The One Who Shines in the Darkness

Takeru with the Soul Metal fist as a shield.

Takeru in Fang of God