Zaruba was created by Makai Priest Amon. A sentient magical ring with attitude, he's the partner and confidant to Makai Knight Taiga Saejima. Acting as his adviser, Horror detector, darkness tracker, and friend, Zaruba served within the Saejima Clan for at least three generations. After Taiga's death, he was transferred to Taiga's son, Kouga Saejima, and later to his grandson Raiga Saejima. A blunt and direct type, Zaruba has a smart mouth, often has a dark sense of humor and mock others for their bad decisions. He always likes the point out the unpleasant side of things as a reminder of their duty as protectors and rubs it in when he's right.

The full strength of Zaruba is unknown; throughout the series, he's able to help dispel confusion, detect various spiritual energies, summon the Garoken, speak for the dead, temporary flight, breathes Madou Fire (in the Crimson Forest and Ilgishin's horror film dimension), detect Horrors, create parts of himself into a ring to help locate and detect Horrors, see through illusions, telepathically converse with others, act as a temporary storage for miniature items, and gauge power of items. His aid is not limited to Makai Knights, as Kaoru once used Zaruba to guide her through the Crimson Forest back to the human world.

As a training partner, Zaruba can put a Makai Knight trainee into realistic illusions as the simulation for the trainee in question to train with; when assisting the young Kouga in mastering basics of becoming a Makai Knight, he has the boy facing several cherub-like constructs that bear his face all at once. When Kouga got knocked by one of the constructs, he also fell in the real world, showing that his body reacts as though said illusion was real. Zaruba also subjects Kouga with his illusive power while forming a pact between them to show the extent of horrifying things he would possibly face as a Makai Knight.

In Moonbow Traveler, Zaruba, through unknown means, can create replicas of himself to aid his active previous heirs. Not only these replicas share similar attributes as the original, but also linked through one another judging from their ability to finish each other's sentences. The difference is the replicas flicker in and out of existence as if they are illusions. At least 2 Zaruba replicas exist; one in the hands of Taiga who temporarily regained his physical form before it presumably faded once he no longer needed it and another kept by Kouga to help him in both finding Kaoru Mitsuki who got sucked sucked into one of Legendary Horror Eyrith's vortexes and subsequently mending space-time cracks the same Horror left behind. 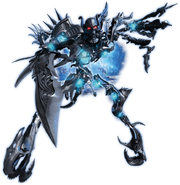